The development of energy efficient homes we built for Powys County Council has earned us a national award nomination.

We have been shortlisted in the building performance category of the 2021 Building Awards for the Passivhaus homes we completed in Sarn earlier this year. It is the second time the project has been recognised as it is also in the finals of the Wales Property Awards that will be held next week in Cardiff.

There is stiff competition from other schemes in the Building Awards including three in London and one in Manchester. The winner will be revealed in a ceremony in the capital on November 2.

The £1.3m development was the first Passivhaus development that had been built for the local authority and the first council homes to be constructed for 30 years. 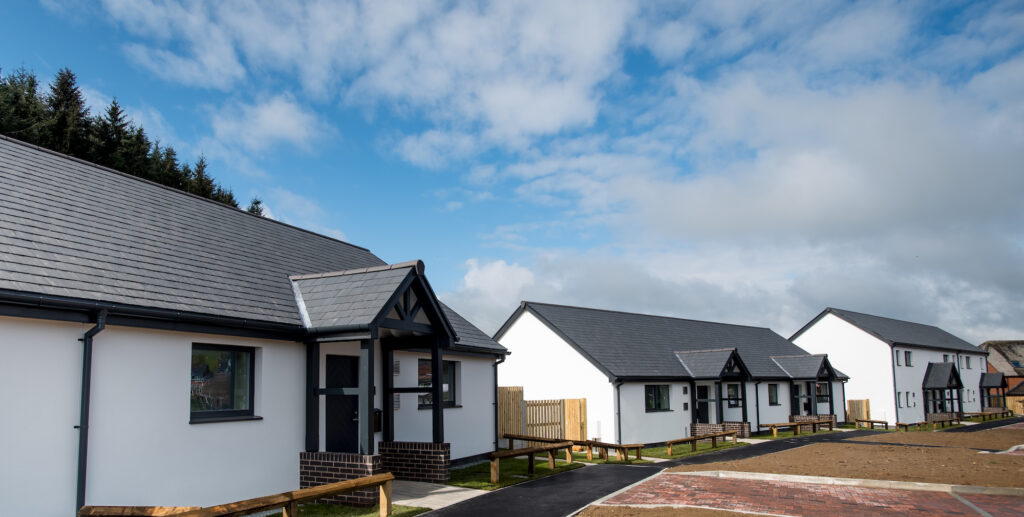 It was developed by the council’s Affordable Housing Team and was part of the council’s Transformation Programme to deliver aspirations in Vision 2025 including to build 250 new homes by 2025.

The seven energy efficient homes – a mix of two-bedroom bungalows and two-bedroom and three-bedroom houses – were built using low energy construction methods and include sustainability features such as solar panels and mechanical heat ventilation recovery systems to reduce running costs for tenants.

Welsh-grown wood was used for the timber frame while cellulose fibre insulation, manufactured from recycled newspaper, was used to reduce the use of plastics.

Managing Director Steven Owen said he was delighted that the development was getting the recognition it deserved.

“There are very few social housing schemes being delivered to Passivhaus standard and Powys County Council should be applauded for its commitment to bringing this scheme forward.

“These were the first homes we had built to Passivhaus standard so it is very rewarding for us to have been nominated alongside some very important industry names.”