Three of the Pave Aways team have scaled new heights in a charity abseil in aid of Oswestry-based charity, The Movement Centre.

Site managers Andrew Owen and Nick Stevens and quality manager Shawn Humphreys abseiled from the roof of Oswestry’s Aico HQ for the challenge, all in aid of the worthy cause.

The brave trio joined a host of representatives from other organisations to raise vital funds in what is The Movement Centre’s 25th anniversary year.

Andrew said the opportunity to raise money for the charity was what helped him rise to the challenge.

“Taking a step of faith over the side of a building isn’t something you plan to do every day but knowing we were doing it for such a good cause is what inspired me,” he explained.

“Supporting local charities and the wider community is something that is ingrained throughout the team at Pave Aways, as we know how much it means to the organisations we fundraise for.

“The group completing this challenge is hoping to raise more than £3,000 for The Movement Centre and we’re so appreciative of the support we’ve received.”

The Movement Centre provides its world exclusive Targeted Training programme to children who have limited movement. It is based in Oswestry at The Robert Jones & Agnes Hunt Hospital where we are currently building the Headley Court Veteran’s Centre.

Donations towards the abseil can still be made at: https://www.justgiving.com/fundraising/aico-ltd1. 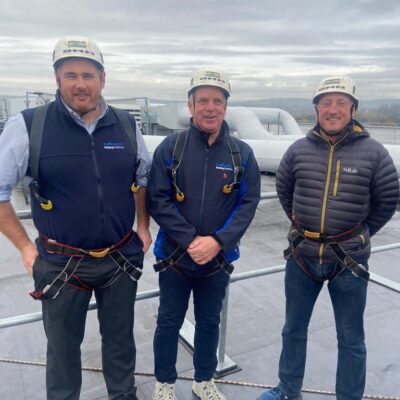