Pave Aways has received a special award from Shropshire Fire and Rescue Service for our role in supporting site labourer Sam Nicholas to work as an on-call fire fighter.

Sam successfully completed his training to become a retained fire fighter in March this year and has combined his position with his job for Pave Aways ever since.

On call fire fighters are men and women who do ordinary jobs and offer evening, daytime or weekend cover whenever they are able.

Sam, who is currently working on the refurbishment of Ludlow Assembly Rooms, is officially stationed at Much Wenlock Fire Station where we completed a £400,000 refurbishment last year.

But he clocks on duty with the fire service wherever he is working for us and has answered emergency calls whilst at sites in Much Wenlock, Telford, Shifnal and Ludlow.

Sam explained: “I have been up scaffolding, tying my boots ready to go to work, eating my lunch, loading up a skip or helping someone with a job when my pager’s gone off summoning me to an emergency.

“I just have to stop what I’m doing, head off site and get straight down to the fire station. I really love what I do and it would not be possible to do it without the support of Pave Aways.”

Sam is also a member of the service’s water first responder crew, which deals with emergencies on the county’s waterways.

Business Development Director Paul Moran collected the award on behalf of Pave Aways at a special ceremony to mark the passing out of Sam and other on-call fire fighters at Theatre Severn in Shrewsbury. 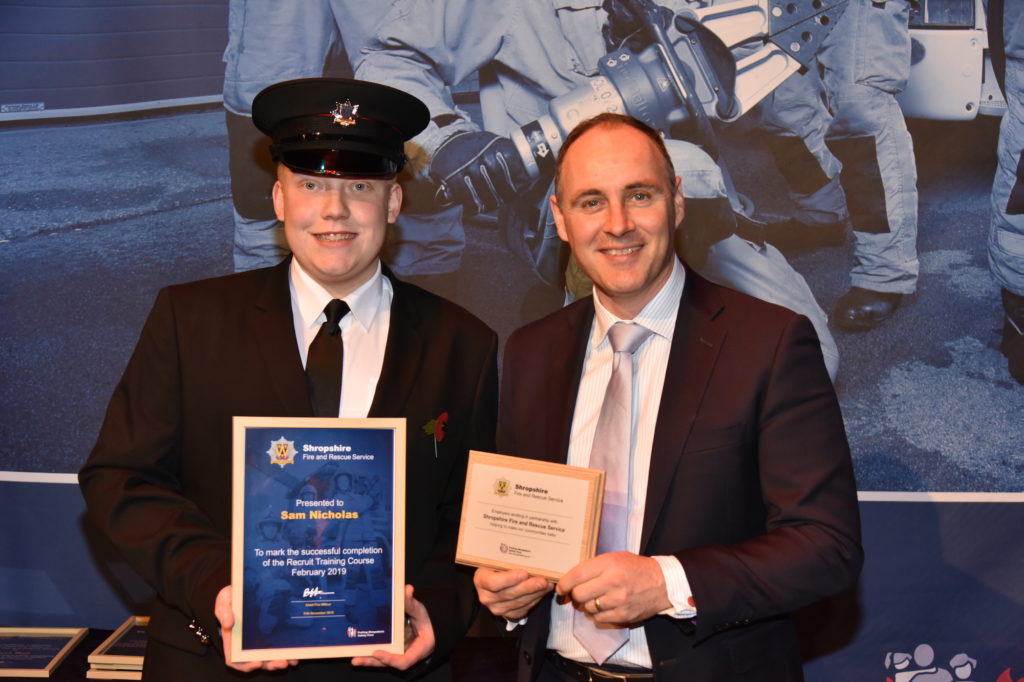 Managing Director Steven Owen said: “We are proud to help Sam serve the community in such an important role.

“We have a long association with the fire service, having carried out the redevelopment of its headquarters in Shrewsbury in 2016. Seeing how the station operated as we extended and refurbished the station around it, gave us an additional understanding of how in demand the service is.

“Supporting Sam to balance his job for Pave Aways with his work as an on call fire fighter is just a small thing we can to do to allow this organisation to continue its life saving work.”